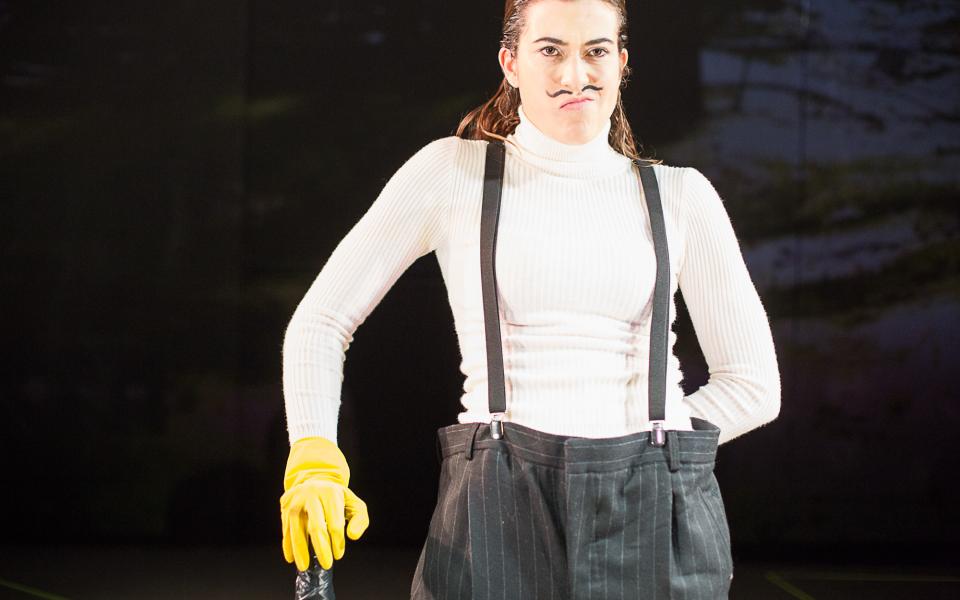 The piece tells the story of the businessman Michael Fischer who tears off the head of a buttercup during his Sunday walk - an act that is not without consequences. Die Ermordung einer Butterblume by Alfred Döblin shows the ignorance of human beings against nature. The actions of the businessman Michael Fischer against his environment are examined more closely in a bittersweet yet humorous way and placed in a larger context. Starting from the beauty of everyday things, greed, power and inconsiderateness expand in a nearly unchecked way.

When attending the event, contact details of all audience members must be collected so that they can be informed in the event of a reported infection. The data will be treated confidentially and deleted 2 weeks after the event. A daily negative test result, the ID or passport and a FFP2 mask must be brought to the performance. If the performance is cancelled due to corona, the full ticket price will be refunded.

Realized in co-production with ACUD Theater.

The multi-instrumentalist Frans Willems, born in Vienna in 1977, and Claudia Marks are a well-rehearsed team. Together they have already worked on four productions. While studying film directing at Luca Brussels, Frans Willems composed his first film music for both his own work and that of several fellow students. Writing theater music was a natural continuation here. Frans is interested in how he can add further narrative layers of interpretation to a play through his music. Originally self-taught in music, he is currently pursuing private lessons in composition, orchestration, and music theory. He is also working on his first opera. Frans' electro pop duo "Eloctric" released their second album "Alpha Deer" in March this year.

Wicke Naujoks was born in Friedberg/Hessen in 1979. From 2002-2017 she was a permanent member of the Berliner Ensemble as costume assistant and costume designer. She has worked for many years with Achim Freyer, Karl-Ernst Herrmann, Robert Wilson and Johannes Schütz. As a costume designer she has worked with Claus Peymann, Manfred Karge, Thomas Langhoff, Martin Wuttke, Werner Schroeter, Thorsten Lensing and Herbert Fritsch. Since 2017, she has worked regularly with Karin Beier, Anna Bergmann, Claudia Marks, Catharina May, Peter Atanassow and Sebastian Sommer. For "King Lear" she is doing costumes for the first time at the Renaissance Theater.

Claudia Marks was born in April 1986 in Paderborn / NRW. After graduating in 2005, she studied Spanish, German language and literature and psychology in Bonn. At that time she already worked as an assistant director at the Contra Kreis Theater with Horst Johanning. In 2011 she finished her master's degree. Afterwards she worked in Munich at the Komödie im Bayerischen Hof with Margit Bönisch and visited the Münchner Kammerspiele every evening, at that time under the artistic direction of Johan Simons. Afterwards she was assistant director at the Altonaer Theater in Hamburg with Axel Schneider, went to the Sommertheater in Winterthur / Switzerland for some productions under the direction of Hans-Heinrich Rüegg and finally came to Berlin.
At the Berliner Ensemble, under the directorship of Claus Peymann, she assisted Robert Wilson, Manfred Karge, Claus Peymann, Leander Haußmann and others. In 2014, she worked for the Schaubühne and assisted Thomas Ostermeier for "Richard III." She further worked with Michael Thalheimer and supervised numerous guest performances.
Today Claudia Marks is a freelance director and collaborator of the Performing Arts Program Berlin. Her productions include: "4.48 Psychosis" by Sarah Kane, "Kings" by Maria Maier, "Happy Days" by Samuel Beckett and "We Are the New Ones" by Ralf Westhoff. She lives in Berlin with her husband and son.

Marie Philipp was born in Potsdam. She took acting and dancing lessons at a very young age. Attending the Babelsberg Acting School for four years was followed by two years of musical school in Potsdam and two years of stage arts school in Berlin. Later she completed her school career at the Babelsberg Filmgymnasium.
She has lived in Berlin since 2013. There she completed her acting training at the state-approved Charlottenburg Acting School, which she successfully completed in 2017 with the final production "Carmen Kittel", in which she played the title role. Marie Philipp has already appeared in front of the camera for several film productions, for example in the short film "Linnea" (2014), which was nominated for the Max Ophüls Award. Since graduating, she has focused primarily on stage acting. Thus, she has already participated in several theater productions. In addition to Claudia Mark's production of Sarah Kane's "4.48 Psychosis" (2017 Studiotheater Charlottenburg/2018 Amalthea Theater Paderborn), Marie Philipp was engaged as an ensemble member at Theater Morgenstern Berlin in 2017/18. Further productions followed under the direction of Claudia Marks. Here she was seen in "Könige" by Maria Maier, in the two-person play "Glückliche Tage" by Samuel Beckett, where she embodied the tragic role of Winnie, and in 2020 in "die Butterblume" by Alfred Döblin. Since 2017, she has been a permanent ensemble member at the SommerTheater Winterthur. Among others, she has appeared there in the plays "Der Zinker" by Edgar Wallace, "Der Regenmacher" by N. Richard Nash (director: Philippe Roussel), "Und das am Hochzeitsmorgen" by Ray Cooney (director: Nadine Schori) or in "Wir sind die Neuen" after the film of the same name by Ralf Westhoff (director: Claudia Marks).